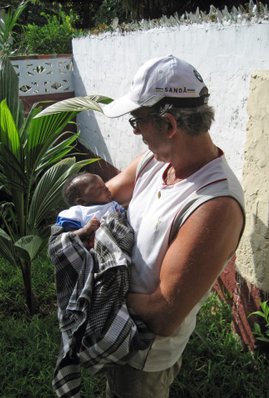 Janne and AnnGreth's sponsor girl Paulina was 6 years old in 1993. Today she is a trained teacher.

How it all started

Many have asked us how Chigambas started and why in the Gambia? It is not easy but I will try to summarize what has happened since the start.

In 1993 we (Janne and AnnGreth Wickman) traveled to the Gambia for the first time. It was a holiday trip and we had decided before the journey that we would help a poor child with education and thus a better future. At the hotel where we lived, we met staff from the Swedish-Gambian Association who helped us find a girl who needed financial support to be able to go to school.

In 1995, we traveled to the Gambia for the second time and met the same people again but at that time, they had started up their own organization which they called Cysarda. They asked us for help to get sponsors in Sweden but we soon felt that the structure of Cysarda was not the way that an aid organization should be organized.

An idea was born: Why not build our own organization so that we could shape our own rules for how to help the poorest children for schooling in the best way? We decided to give it a try and that the organization should be called CHIGAMBAS (CHildren In GAMbia BASse). This was in 1996 and in addition to both of us, CHIGAMBAS was formed by Ma-Lou Mathias and Maj-Lott Jonsson.

CHIGAMBAS should be a non-profit association and also be politically and religiously independent.

We traveled to Basse, 40 miles from the coast for the first time in 1996, and then met Haddy Njie and Lamarana Jallow. We talked about our plans for CHIGAMBAS work in Basse. Haddy and Lama thought our ideas were good and accepted to work for the organization. The idea was to run a preschool in Mansajang and we borrowed a building where we started the activity with a number of five-year-olds that we had found sponsors to in Sweden. We had very poor finances so the children had to start school without either benches or chairs but we soon got help with making a number of them. We decided that CHIGAMBAS school uniform should be purple and that the children should have them for free.

The village of Kaba Kama had been promised a school for a number of years, therefore this was where CHIGAMBAS new school should be built. In 1997, the new preschool was finished, painted yellow and blue. The school contained two classrooms as well as a storage room and teacher's room. We registered 25 five-year- and 25 six-year-olds. In Sweden we had collected school benches and received financial help to send these with a container to Basse. All the children got their own school desk and chair. In 1998, new toilets were also completed.

The board worked hard in Sweden to strengthen CHIGAMBAS's finances. Some young people in Sweden came up with the idea of ​​making a gala performance with singing and dancing. The idea was implemented and 6,000 people bought tickets for the 14 performances! All the money, SEK 100,000 went to CHIGAMBAS! This was a great success economically. We could now continue our plans for construction work in Basse.

A discussion with the Mansajang City Committee began. CHIGAMBA's proposal was that if the association got the building, which was in a bad condition,  and that the site was registered at CHIGAMBAS, then we promised to renovate the building and continue to run the preschool there. The discussion was short, the city committee thought the idea was very good and the renovation started. Since the building was large and we realized that this renovation would be expensive, we put it on a two-year plan. Two years later, preschool number two was completed. 25 five-year-olds and 25 six-year-olds could now begin their education. A guest house in the same building was also completed.

In Manneh Kunda, another organization had begun the construction of a school, but did not have the financial conditions to complete the building. In 1998, CHIGAMBAS took over the semi-finished building and this site was also registered on CHIGAMBAS. Completion of the school started and a few years later, pre-school number three was completed. Here, too, 25 five-year-olds and 25 six-year-olds were registered and the work in Sweden to find sponsors for these began. CHIGAMBAS office which we rented in Basse was moved to a room in the school building when it was completed.

To solve the electricity problem, a solar power plant was purchased. Håkan Persson, a Swedish man living in Gambia and a trained electrician, helped us with this. When this facility was finished we had power for some lamps, fax and a typewriter. The solar power plant still works today.

We were informed that many children had to go to school without any breakfast. Could we do something about this? One way was to build kitchens in the schoolyard and that the children could get a meal a day. In 2000, we had got some willing sponsors in Sweden and were able to implement our idea. Today, 360 children receive food every day. The money also covered the building of walls around all the three schools. In 2001, construction of sun protection / rain cover was carried out for the children where they could eat their food. In Manneh Kunda a house was also built for our own tailor. Now there were 300 school uniforms / year to be sewn.

The association grew and our office staff lacked space. Therefore, in 2004, we decided to start building a new office in Manneh Kunda. A guest house was also built in the same house. In November 2005, there was a great opening ceremony. In connection with this, the solar power plant was expanded and moved to this building. In the same year, water reservoirs were manufactured and installed to ensure that we had water, primarily for cooking. A sponsor in Sweden donated SEK 10,000 in 2006 and she wanted us to build showers so that the children could shower once a week or when needs arise. They were finished the same year, two for girls and two for boys.

In 2007, WFP demanded that we had three and four year old children at school if they were to help us with rice. We decided to increase the number of children in our three schools with 25 three-year-olds and 25 four-year-olds, thus helping these children with one meal a day. We built small houses to ensure that the smallest children should have somewhere to rest if needed. Unfortunately, WFP interrupted its rice deliveries after just one year, according to themselves, due to new rules. CHIGAMBAS now had to pay for the rice themselves at a cost of over SEK 50,000 / year. It became a major economic backlash for the association. Despite this, we try to continue feeding our children.

Our students now began to get older and everyone did not pass the ninth grade. CHIGAMBAS wanted to help this students with vocational training. There was a vocational school but in a very poor condition. A deal with the owner was made. If she let our students go to school at a reasonable cost, CHIGAMBAS offered to help repair the vocational school. This repair was completed in 2008 at a cost of approximately SEK 60,000.

In recent years, a lot of play equipment have been manufactured such as swings, soccer goals, balance tools, etc. Kitchen gardens have been laid in all the schoolyards and what is grown there, we can use in our kitchens. Since 1996, CHIGAMBAS has ensured that over 2000 students receive or have received school education. Some of these students are currently working for CHIGAMBAS. CHIGAMBAS also helps with financial support for those of our teachers who want to continue their education. The biggest revenue comes from sponsors who pay a fee for "their" child in Basse. For this fee, we promise the sponsor that "their" children receive school building, educated teachers, books for writing and textbooks, school uniform and food every day at our preschools. Grades are sent to the sponsor each year as proof that the student has been in school. CHIGAMBAS at best follows the student to the 12th grade.

Back to the previous page